life with max: three weeks in.

Three weeks in and we’re still alive! That may be an accomplishment in itself. Week three has definitely been… the hardest. FULL ON SURVIVAL MODE. Maybe it’s because the sleep deprivation really set in or because we went through a growth spurt (I think?!) and were eating constantly for three days, but it’s been harrrrrd. But it’s also been the best. It’s like… every single day with him is the best?

When my eyes pop open in the middle of the night to him squeaking and squirming, I initially feel a slight dread that I’m awake but then I remember why and look at his little face and want to just melt.

Into a gigantic puddle.

I end up staring at him and asking over and over (and over and over) how someone so cute can even exist in this world. You know you’re in major love when even his little cries look adorable and cute.

And when he does this little Elvis lip curl when he’s hungry. GAH.

I swear he has a little personality already. It is straight up amazing. Annnnnd I’m such a broken record, I know.

Still just cannot get over how much I love this little guy. Like it’s not even real. I’m still holding him constantly and spending so much time cuddling. And you know what? I highly doubt that in eight or ten weeks, if he refuses to sleep unless it’s in my arms… that I’m going to look back and regret holding him this much. Never. At least I can’t fathom such a thing. I’m snuggling him constantly and it’s still going so fast! And still not enough. I wish there were more hours in the day for baby hugs.

It’s exhausting but part of me doesn’t want it to end because it’s so sweet.

Last night after feeding and swaddling him, I set him down to sleep and his eyes popped open and he started whimpering. I swear his little eyes said “mommy, just hold me until I fall asleep!” I picked him back up and he was out within minutes and I could barely handle the love. Everybody says how much a newborn sleeps but to be real: mind doesn’t sleep THAT much. His little alert eyes? Yeah. They are almost always that open. I read somewhere that at this stage newborns sleep around 15 to 17 hours per day. Ummmm no. He is so awake and alert all the time. He squeaks and makes noises so much that I swear he tries to have full-blown conversations with me.

Okay maybe now I’m losing it. But you know.

I spend hours talking to him and am pretty sure if anyone peeked in my window they might thing I’m a crazy person. (Which I totally am.)

In the third week, we:

1. Attempted an outing to Nordstrom the day after Christmas. This was only slightly traumatizing: we had bought a snap and go stroller months ago and threw it in the car, only to learn once we were there that our carseat DIDN’T FIT. Hello new parenting fail. Thankfully I took my solly baby wrap and wrapped him up and wore him the entire time – I still think it was the longest stretch that he has slept so far. As an aside, I LOVE the solly baby – I have a few other wraps but haven’t tried them yet. The solly baby seemed the least intimidating and more comfortable with how stretchy it is. I wore him around the house many times in the first two weeks before wearing him out.

I ADORE WEARING HIM.

Not that we’ve taken him anywhere since – and now it’s like 20 degrees below zero. We’ve been in serious hibernation and survival mode this last week, for real. He eats every 1.5 hours, maybe 2.5 if I’m lucky, so on the couch we’ve lived.

2. Discovered the adorableness that is baby sweatpants. He still swims in newborn clothes but the sweatpants? I die. 3. Rang in the new year in a glittery onesie. Um, I totally bought it before I gave birth and decided upon its arrival that it was gender neutral enough. If anything, it goes with the unicorn rocker in his nursery. 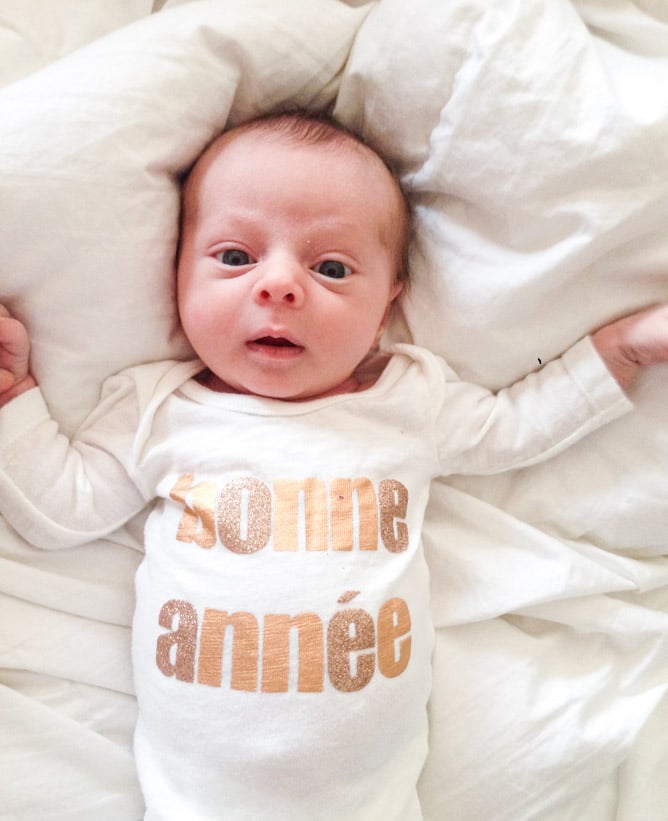 4. Got through the baby blues. Apparently it is a real thing. The best way I can describe it is that I was so thrilled, but at the same time felt so alone. But at that same time, wanted NO ONE around me to make me feel less alone. And at that same time, TONS of people were here and I was losing it. Does that make sense? Probably not, but it actually passed after two weeks. I didn’t think it would. It was such a WEIRD feeling. I tried describing it to Eddie and he’d nod in agreement but I know inside he was like… wtf?

To be real, normal everyday tasks still seem completely daunting, let alone actually working the capacity like I was before. I have no idea how to explain it unless you’ve lived through it. I definitely could never comprehend what people meant when they said that newborns take up ALL your time, but it is so very true. It blows my mind. I was like… what do you mean you don’t have FIVE MINUTES to shower?! That’s not real.

So, now that we’ve been home for three weeks and I’ve literally been planted on the couch, I’m starting to stir and itch that there are things I SHOULD be doing. With the new year and all the talk of goals and what not, I’m starting to think of everything I should be doing for work. Then I remember that I will never get this time back and worked ahead a lot so I could take this time to snuggle nonstop. I mean, it’s FRIGID outside and snowy and it’s the most perfect time to do nothing but eat and nap and kiss fat cheeks. And cuddle his little arm rolls. It’s really all that matters.

61 Comments on “life with max: three weeks in.”