Oh hello my favorite friend. What does it mean if pizza is your BFF? 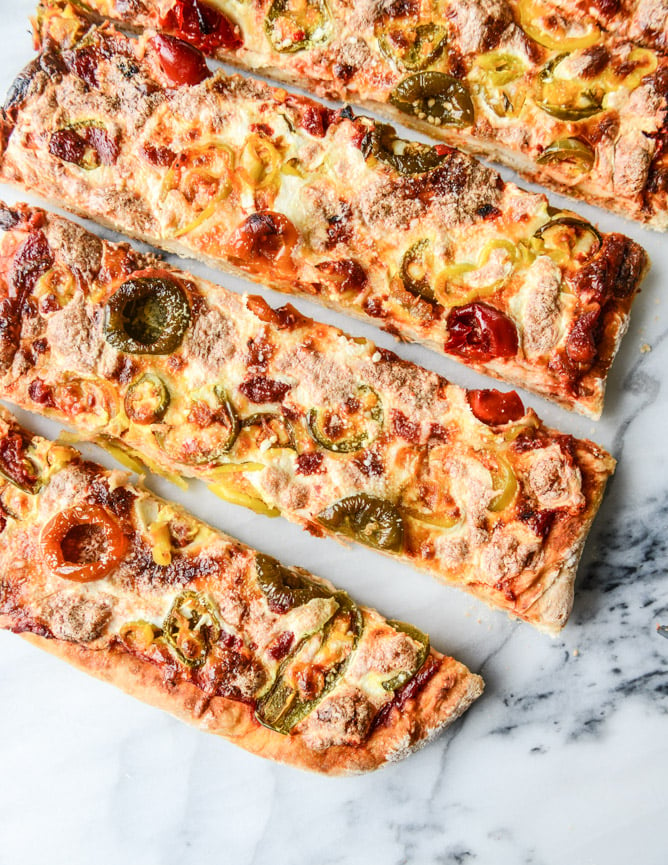 And I never even liked spicy food before! Especially peppers. Or sauce!

Oh my gosh. So many contradictions here. Way too many exclamation points. I’m eternally embarrassed and already annoyed.

It’s with good reason, I promise. 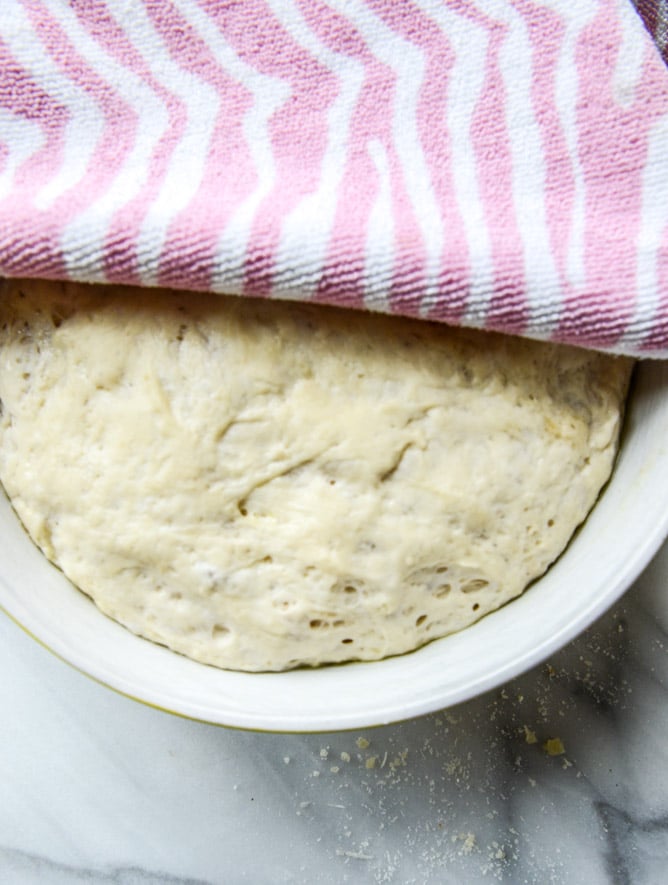 When I was first developing recipes for our summer eats project, I thought about including some of the milder jarred peppers on a pizza. Mostly because I adore all things briney and tart and they sounded better than sticking, well… PICKLES, on a pizza.

I’m sure you feel me.

But then I thought… what if I do some sweet peppers and some hot? And I was told that the high heat of the oven cooks out a lot of the spiciness in the peppers and before I knew it I had dumped an entire jar of dilly, spicy jalapenos on my sauce and cheese.

It was not a bad decision. 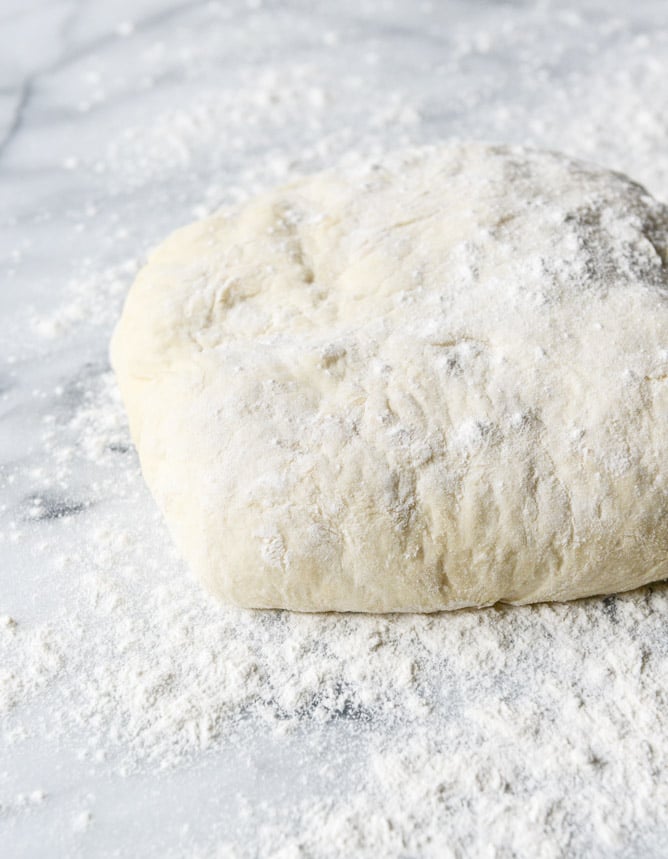 I have no idea what it was about this pizza that day, but it hooked us all. The toppings are SO simple yet the flavor combination is incredible and deliciously compatible. You can easily use fresh garden peppers, however they will lack that briney, vinegary goodness. I wouldn’t skimp on any of the cheeses and I think it’s imperative to have hot AND sweet peppers, but you can also add a bit of pepperoni if you’re feeling it. Sometimes I’m feeling it.

[Because I’ve had to try that twice now since I live with the carnivore of the century.] 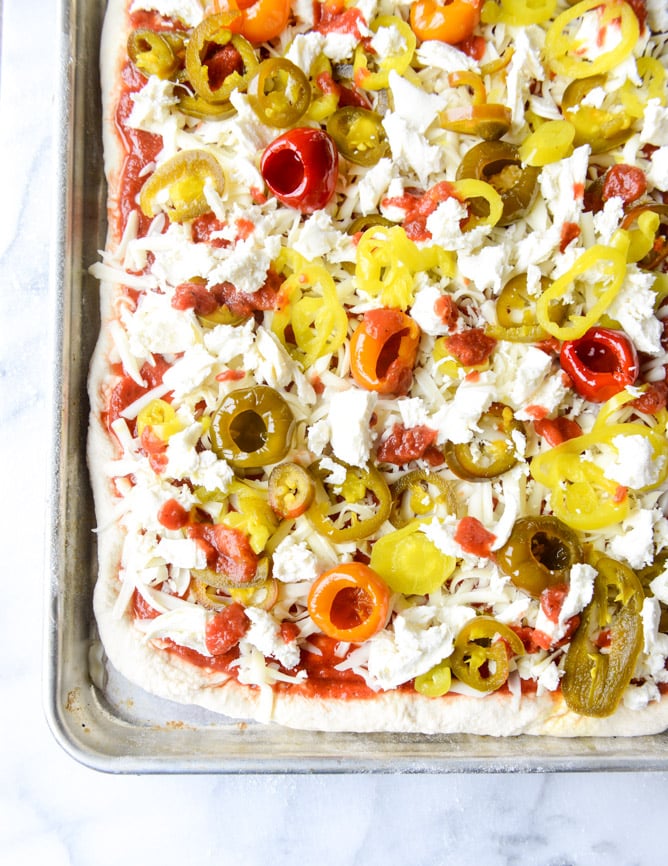 Also, I must tell you about the crust.

We know that I’m a little fanatical about pizza crust. I’ve been making my own for years and aside from a ball or two bought from Trader Joe’s, it’s pretty much the only way we’ve eaten pizza that isn’t delivery unless its faux-ed on a fluffy blanket of naan.

So. Before I had Max, I made three whole wheat crusts and froze them. That was an awesome idea but I kept forgetting to defrost them (I’d remember at 5:30pm) and they as hard as a rock.

The thing is that I happen to think that pizza crust is fairly easy to make. I always use honey and rarely have problems with yeast and have tried to convince Eddie that he can do it (!!!!!) because it’s foolproof and I’m not even a real baker.

But. He really wasn’t into that and in February, walked through the door with a bag of this new DeLallo’s dough. I was 1. jealous because I didn’t even know about it, having not been out of the house in weeks and 2. thrilled because I figured this meant that he’d make pizza and my appetite was totally outrageous.

[Sidenote: the number of doughs that Eddie has brought home now is borderline insane. He goes to DeLallo every Saturday morning to get a half dozen cookies (which he then inhales on Saturday night with Boylan soda) and comes home with bread, tomatoes, cheese and peppers. And like FOUR bags of dough every week. The pantry currently hates us.] 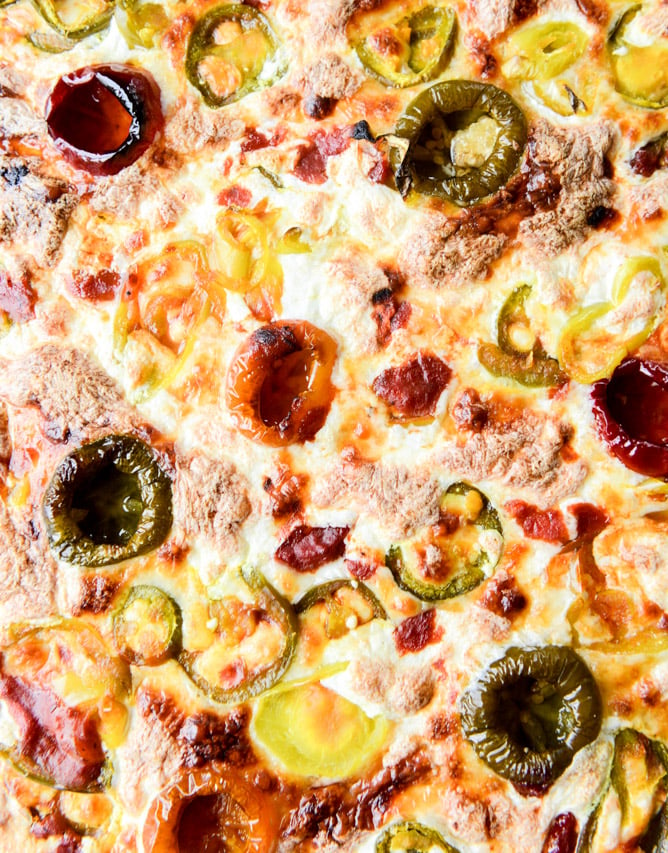 Needless to say, he did make pizza and we really liked this crust. If the day has been hectic and I didn’t get to make dough in time for dinner, Eddie will make this when he gets home and it rises in about 30 minutes. It’s thick and fluffy like my garlic bread pizza crust and I’ve even tossed some herbs in the flour too. But enough!

These toppings are so fantastic that even if you don’t have time for pizza, put them on toast or something. Just do it, get them, stuff them in your face. Sweet and salty and cheesy and spicy and gahhhhh. Who am I and how is this pizza my new life? I’m loving it. 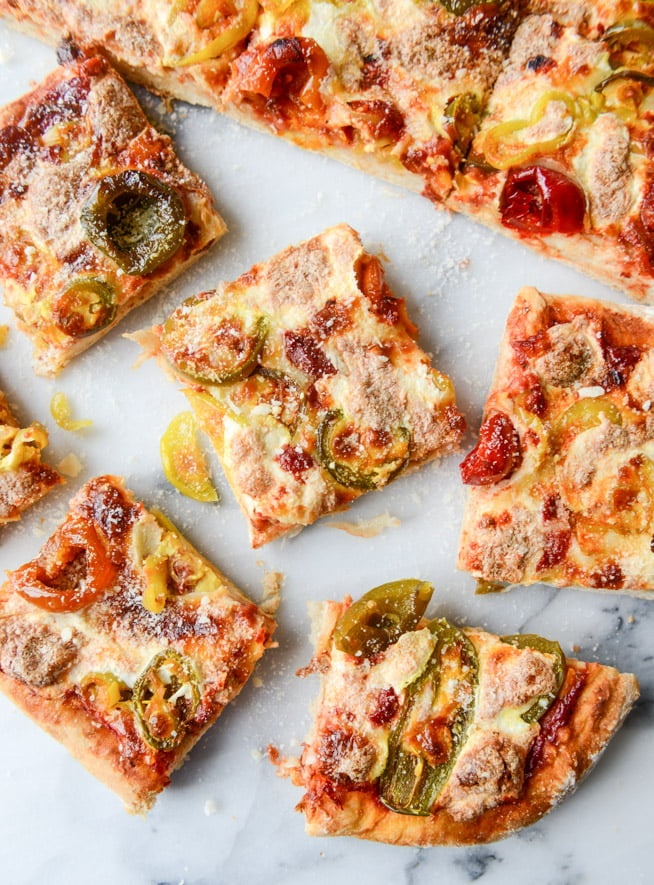 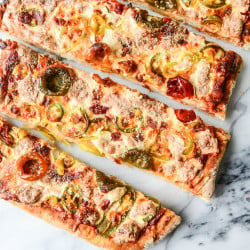 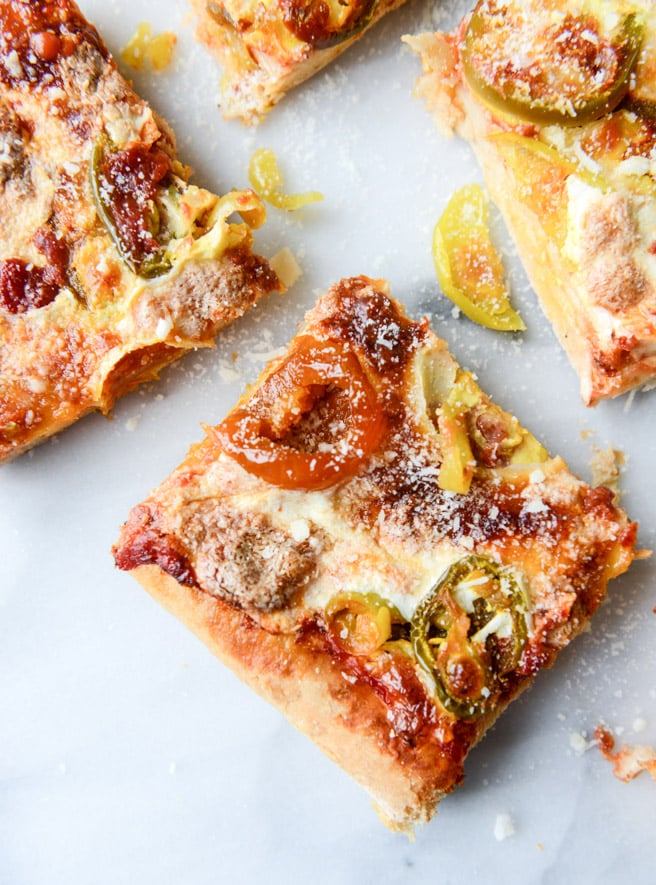 I totally want to hide out in that spicy little pepper cave up there.