Oh yes we are.

Um, but you might be surprised. Because there is barely any cheese involved. BARELY. We are talking sprinkles.

Not THOSE kind of sprinkles… but cheese sprinkles. On this roasted Sicilian cauliflower that tastes like actual heaven. So! Back when we were getting our kitchen redone (yes yes, you’re going to get to see it here shortly!), we managed to eat fairly well. We didn’t go out to eat very much and I mostly attribute this to still being in the somewhat sickly stages of pregnancy where any and all food sounded horrific.

A handful of times, Eddie brought dinner home from Whole Foods. Not necessarily just the hot bar foods, but once or twice he picked up the meals that are $25 and include a large entrée and two sides.

The ones he brought home were pretty good even when nothing else sounded tasty, but of course his choices were super meat heavy. You could bring me three sides and I’d be a happy camper. Like, at a steakhouse? I’d be happy ordering three side dishes for dinner and no steak or seafood. Yes please! Anyhoo, one evening he brought home the Sicilian roasted cauliflower from Whole Foods. It was super flavorful. Tasted phenomenal at the time, which may have been because we did nothing but grill the same vegetables for eight weeks.

The taste was so spot on though – and when I looked at the ingredients, they were pretty simple. I was on a mission to recreate it as soon as we had a working oven, which happened a few weeks later.

I’ve been making it ever since as a side dish to some of our favorites, things like flank steak and even chicken sandwiches. For some crazy reason I’ve always enjoyed cauliflower even though my distaste of vegetables is high – but only if it’s roasted. It weirdly tastes like popcorn to me when roasted. Straaaange. But! I’ve been waiting to share this and while it’s something I’d probably make more in the cooler months, we’ve been enjoying it so, so much.

P.S. I’m not about to call these cauliflower “steaks” because I just can’t get into that, but I did sort of slice them like so. You can certainly do it with florets if that’s easier. Do your thang. 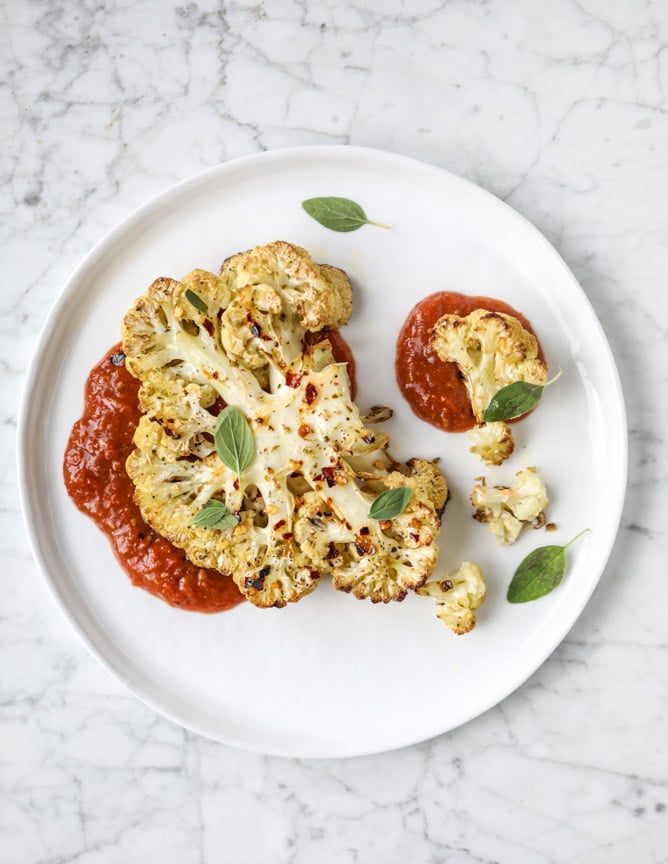 This quick tomato jam recipe is one I first developed last year when making these bacon and egg avocado toasts. It’s a spin-off of the heirloom tomato jam from American Spoon and is SO delicious, almost like a jam form of ketchup, but a million times better. And that is saying a lot since you know I don’t love tomato-based things! Or shall I say: tomato sauce based things. The one thing I wished that the Sicilian cauliflower had the first night Eddie brought it home was some sort of dipping sauce. While I initially was aiming for a chipotle crema or even a cheese sauce of some sauce, it didn’t really jive with the whole spice mix on the cauli. I love those two things, but they were semi-weird with this dish.

Therefore, tomato jam it was! This stuff is ridiculously easy to make. You simmer a few fresh cherry tomatoes with some other delicious ingredients and blend the whole thing until smooth. Tastes like MAJOR summer. Then you dip! posted in: Recipes, Side Dishes 39 comments