So I propose that we eat this all spring and summer long. Ooooh my heavens. This pickled shrimp is ridiculously good. And it’s so super versatile! And it’s pretty too. BONUS POINTS. I feel a little funny calling this “salad” because, um, I just sliced up an avocado.

That’s it. I sliced the avocado and spooned the pickled shrimp mixture over top. I’ve wanted to make pickled shrimp forever! And that is crazy because I kind of went on a shrimp hiatus while pregnant with Max and my desire for it never really came back.

But this! It’s always sounded incredible to me. I knew that Saveur wouldn’t steer me wrong either. I was so excited to make this and love it just as much as I thought I would! This is one of those can-serve-at-the-Kentucky-Derby party recipes! I like to share a few every year since Eddie is so crazy over the Derby (and yes, of course I have trashed up pimento cheese recipes coming!) and I still want to have my dream Derby party. It’s just that the party would last, like, two minutes.

Okay, maybe not the party itself, but when do you start the party? An hour before the big race? Two hours? Have everyone down their mint juleps and watch the main event? Then enjoy company an hour or so after?

Okay so I just planned it and might as well do it!

Please come. All the mint juleps on me. Now, for pickled shrimp! It’s not shrimp that you pickle and can and eat a few days later. You only let it sit in this delicious flavorbomb of a mixture for a few hours. And you can serve it on its own, with some crusty bread – anyway you’d like! I’m just so into it and love the idea of piling it on top of a sliced avocado. You don’t need anything else. It’s so satisfying and filling!

Also, I threw it in a jar because that made the most sense for my fridge space. However, this is NOT a canning recipe! You can also toss everything together in a bowl and stick it in the fridge. If I did that, I would just keep sneaking in and eating pieces, bite by bite. It’s irresistible. Since I can’t do much traditionally, I added a bit of corn in here too. And some red wine vinegar. And fresh dill! And red onion. And lemon wedges.

I could seriously drink this. Isn’t that wonderful and awful at the same time? 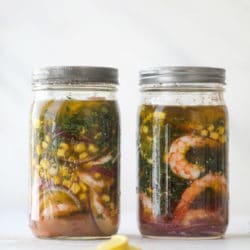 It’s also my new favorite thing to look at!