Eddie is in heaven. Let me just tell you. These sweet potato pierogi are so much easier than you would think and they ARE SO GOOD. The flavor is fantastic. They are puffy yet crisp on the outside . The filling is creamy and cheesy. We cover them in brown butter and chives and then give them a little twirl through a pile of sour cream.

I am officially dead.

P.S. there is a huge debate on whether to call these pierogi or pierogIES. I’m on the fence and usually say “pierogi” as the plural. What do you say?!

Remember when I made pierogi pizza way back when? I mean, it was an embarrassingly long time ago. Pierogies are a staple here of course, given my location! Especially this time of the year when Lent is about to begin, pierogies are everywhere. Everywhere!

I’ve always loved them, especially since potatoes were my favorite food when I was growing up. Where they really hit me though is right in the nostalgia heart. Pierogies remind me of my elementary school days when I would go to our church’s fish fry which also happened to be at our school – and I would have the best plate of pierogies, hold the onions please.

I can still taste them.

And you know what? Pierogies might be Eddie’s favorite food of all time. But we can be major pierogi snobs. I won’t buy a box of Mrs. T’s or anything, so then we end up going an entire year without eating them. Unless we hit up a fish fry come Lent or Eddie makes a pit stop at the pierogi truck.

I mean, it’s really a shame considering our baseball team has pierogi races during every single game. Which, by the way, is basically the only reason other than the food to head to that stadium.

So now that I’ve made them at home, let’s just say that we will be making them ALL THE TIME.

Guys, it’s really so easy! Even when I told my mom I made them, the first words out of her mouth were “the dough is so easy, isn’t it?” And she isn’t necessarily a baker.

The dough IS easy. It’s flour, eggs, yogurt (or sour cream) – a few other things but it comes together quickly and doesn’t have to rise or anything. You roll it out, cut out circles and add your filling. SO SIMPLE. It takes a few steps but it’s really quite easy.

I’ll be making these on my instagram stories this afternoon so you can head over and see!

As for the filling, roasted sweet potatoes all the way! I wanted to roast the potatoes instead of boil them, that way they’d be even more flavorful than expected. The sweet potatoes get tender but have caramely bits on the edges and those make them taste delish.

After the potatoes are roasted (which, by the way, you can totally make the filling ahead of time!), I whip them up in the food processor. Then I stir in alllllll the fontina cheese.

Yes, the meltiest goodness that is fontina.

I love it so much.

The creamy, silky filling is wonderful. You will want to eat it with a spoon! The fontina somewhat melts into the filling when you’re making it, but then it REALLY melts when you boil and crisp up the pierogies.

Here’s the great thing about this recipe: you can make them at once and freeze them once made. While these aren’t difficult, they are definitely not my idea of an easy weeknight meal from start to finish. They are more-so a meal you make on a snow day, or on a sunday afternoon when you don’t have plans.

But the best news is that you can make a batch, seal the dough and freeze them all! I have a bag in in my freezer right now.

From freezer to plate, these only take about 10 minutes. Well, maybe more if you wait for your water to boil. But you only need to boil them for roughly 3 minutes, then toss them in a pan with some butter for another 5. 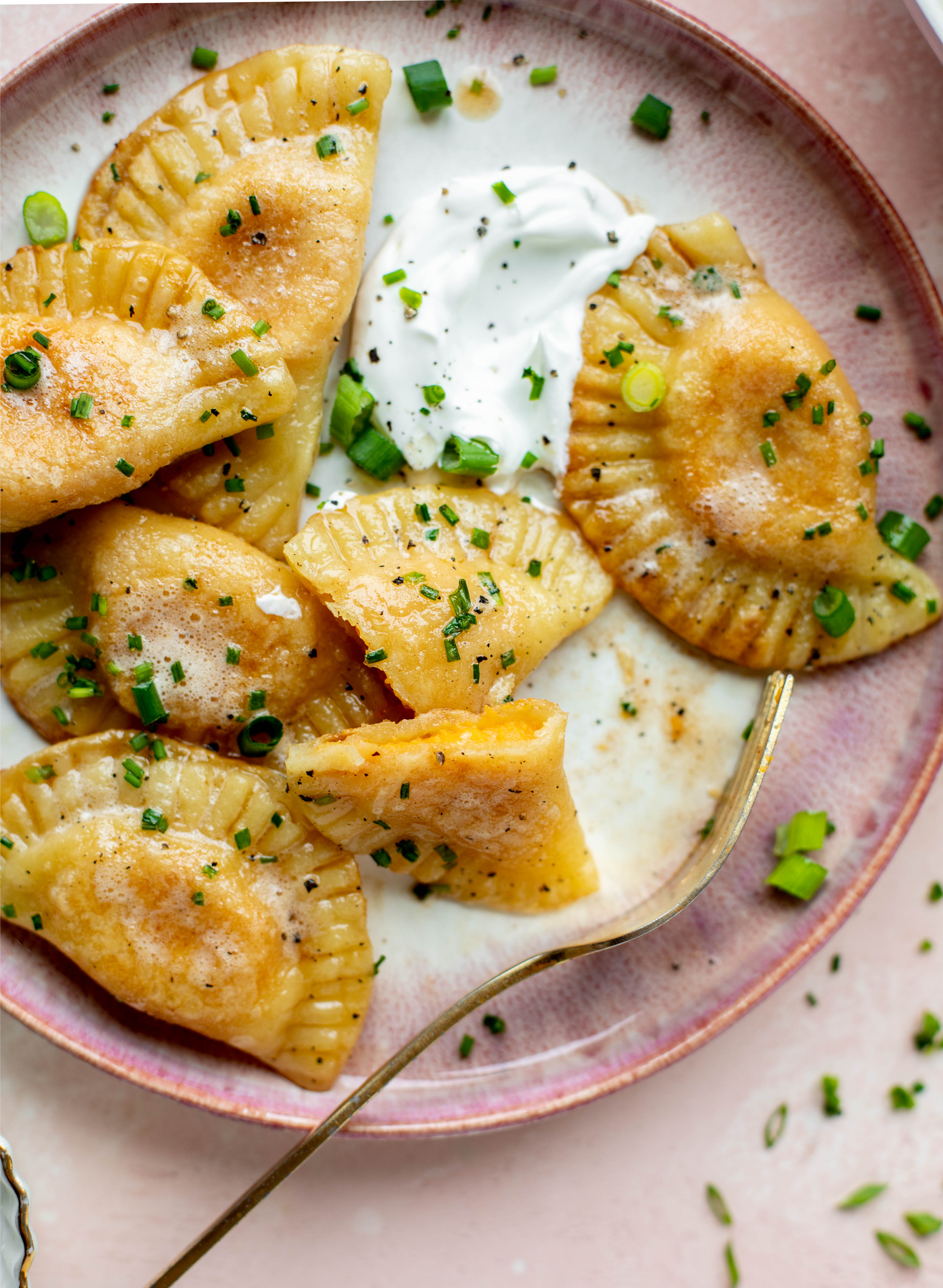 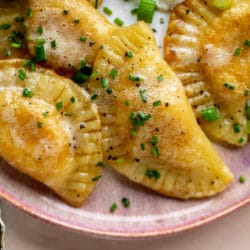