This baked spaghetti squash parmesan is similar to baked ziti, but – is spaghetti squash! It’s so flavorful and comforting. Cozy and saucy, topped with burrata cheese and crushed red pepper. It’s delicious!

A new side dish for you, coming in (literally) hot! 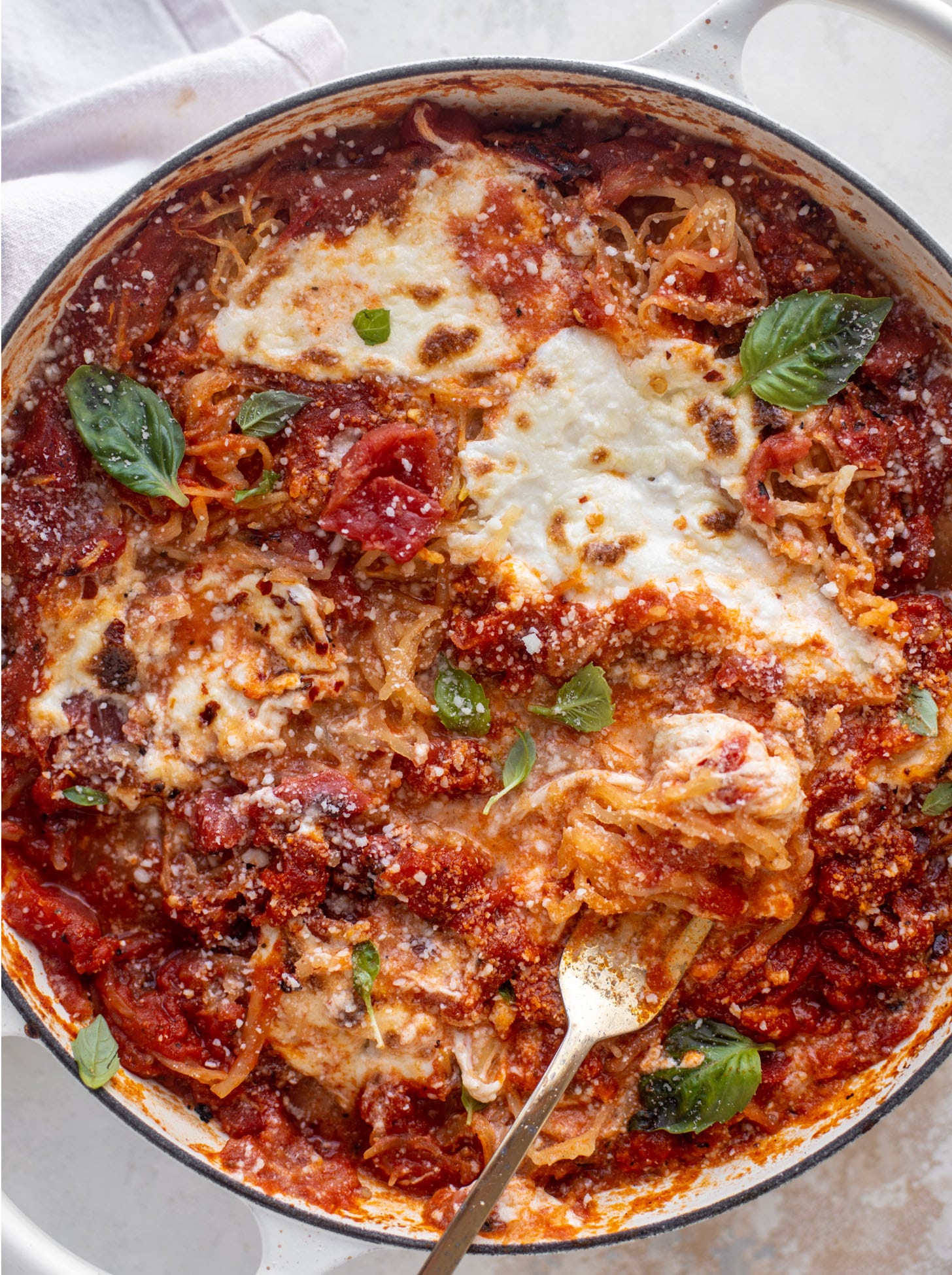 Apparently I’m all about the saucy baked pastas right now!

And I am on a side dish roll. I don’t think it’s any secret that every few months I go through a phase where I need to discover a few new side dishes to spice up our favorite meals.

A great side dish adds variety and makes the classic favorite entrees more versatile. They truly round out the meal for the best reasons. I write about this a lot in Everyday Dinners but my mom was the queen of dinner (and the side dish!) when I was growing up. She cooked every night and while we ate a lot of the same things like many 90s families did (chicken marsala, pork chops, pasta, tacos!), she frequently changed up the side dish options which really made these meals feel like a whole new and different dish week after week.

I swear it is one of the secrets to cooking often without losing your mind and getting bored. And I know it’s not REALLY pasta. But it mimics a pasta dish. Almost like a baked ziti of sorts. Or my baked gnocchi. This is very similar. I love spaghetti squash! Emilia might even love it more than me. I don’t find that it’s a great pasta replacement, but I love it for what it is: delicious, slightly crunchy squashy strands.

Spaghetti squash is so delicious and I love how it can take on the flavor of whatever you’re pairing it with. In this case, fire roasted tomatoes, lots of garlic and burrata cheese.
HELLO. Doesn’t that sound like the best combo ever? The dish gets so saucy and comforting. It’s covered with melty burrata (you can use mozzarella instead if you wish) and a sprinkle of crushed red pepper flakes. This is a little high-maintenance when comparing it to my spaghetti squash parmesan. With the latter, you simply roast and add everything to the squash.

With this recipe, not only are you roasting and scraping out the strands, you’re making a separate sauce and baking it all in a separate dish! Clearly. But there are some benefits to that.

First, some people just don’t want to eat the squash right out of the skin. I get that. For example, my mom would be one of those people.

Second, on that same note, one half of squash could possibly serve two people. Depends on the size of course, but this is another great reason to scrape those strands out for serving.

And finally, it acts as the perfect side dish for many entrees. Serve it with crispy baked chicken, grilled fish or even a veggie burger. It’s save-able (leftovers!) share-able and a lot more manageable when made in a skillet or baking dish. We love this so much. It’s so cozy and satisfying and pairs well with anything as a side dish. It’s great for a crowd, a dinner party, or even a side dish to prep for your weekly menu! 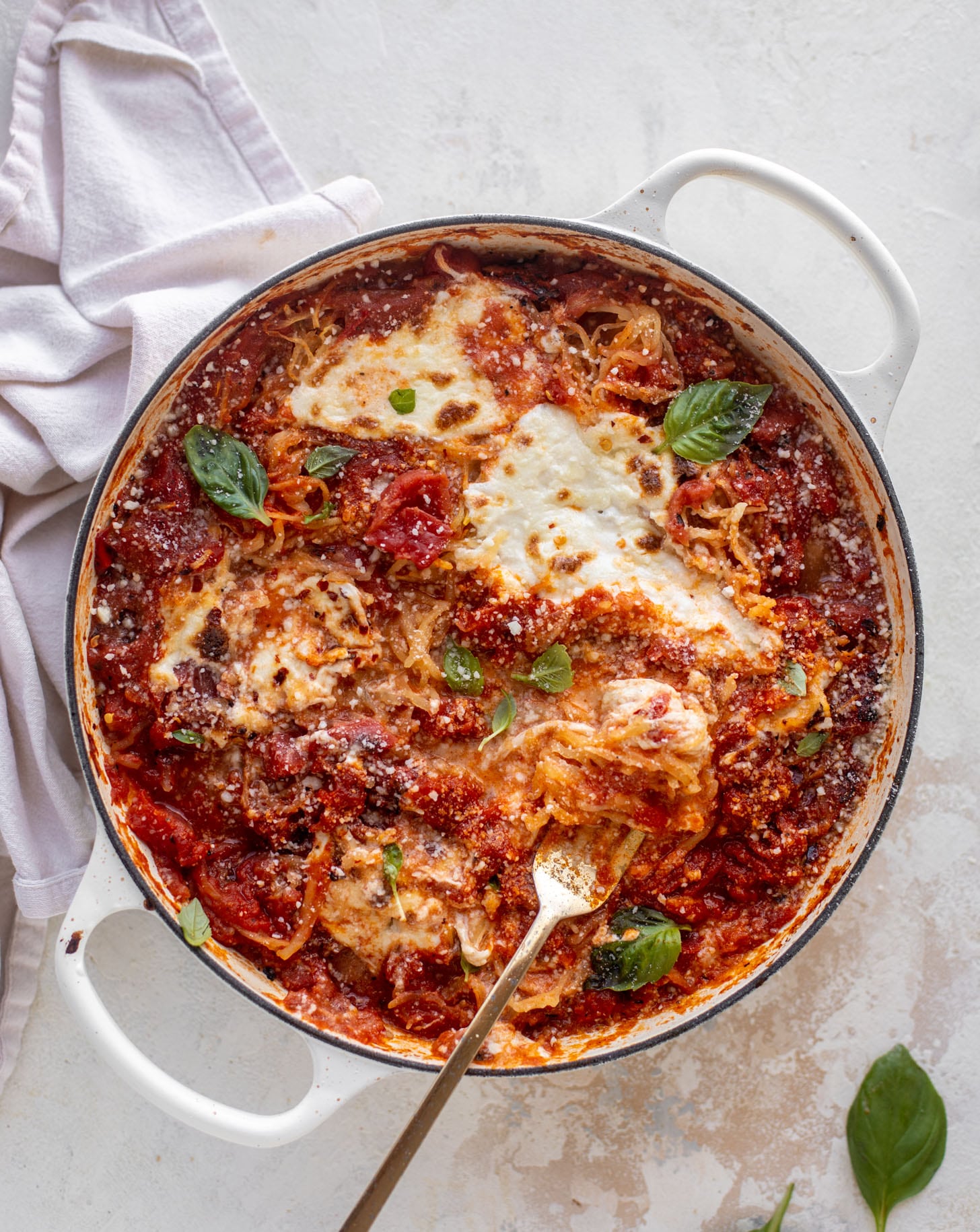 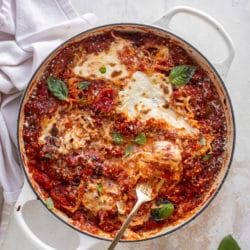 Fork twirl for the win.