I’ve never been so excited about a cocktail! This red apple sangria is giving me all the heart eyes.

Aside from this drink basically LOOKING like October,  this red apple cider sangria is one of my most anticipated drinks for fall. It’s been on radar and I was determined to make it my signature fall cocktail this year. I’m not disappointed! 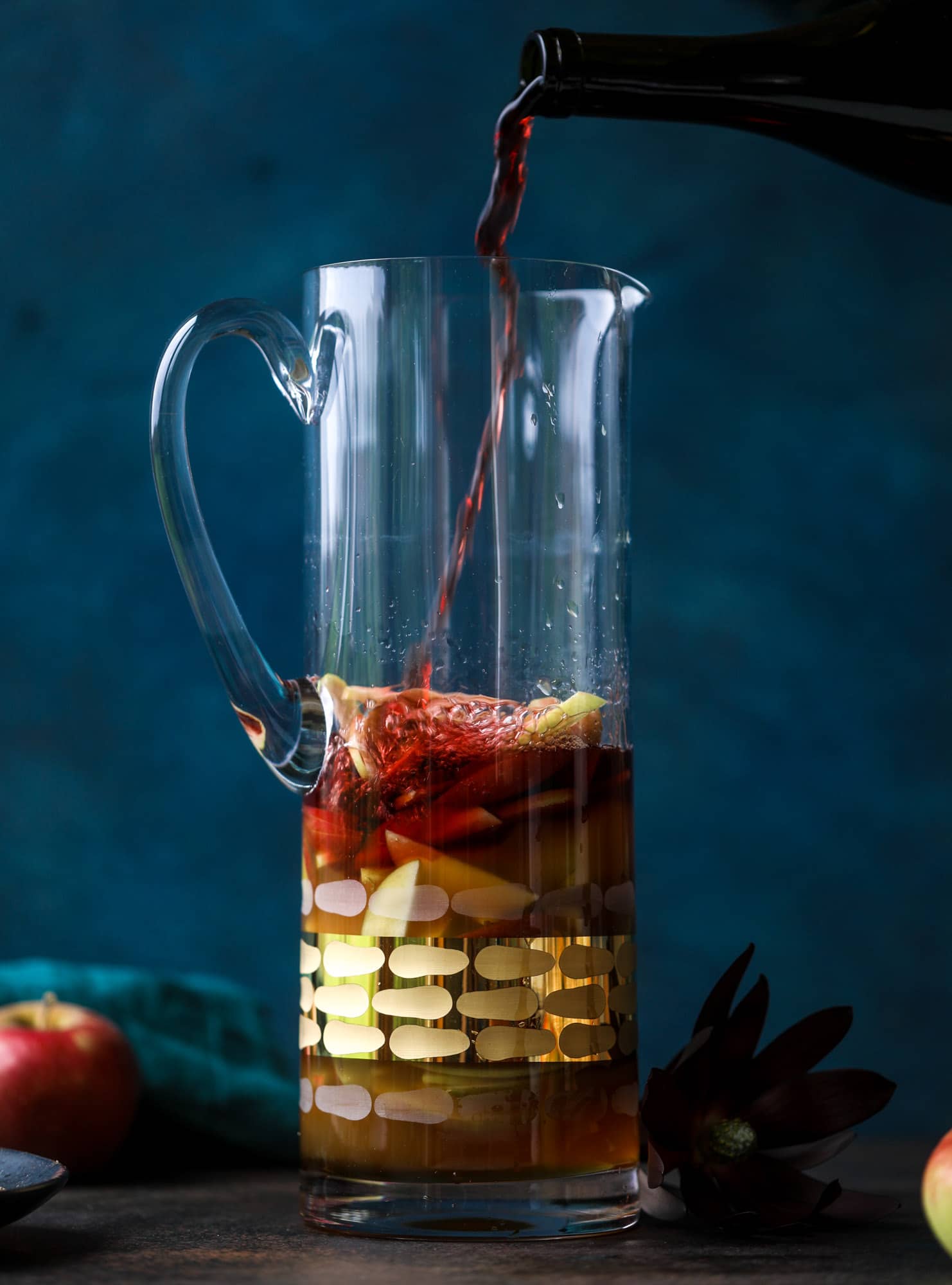 So. Regular old apple cider sangria is one of the most popular recipes here on the blog. I made it AGES ago and you guys love it so much. It’s constantly one of my top recipes, usually all the way through winter and into spring! It’s just SO good.

Especially if you’re an apple cider freak like me. I adore apple cider. It’s so much better than pumpkin and salted caramel and all the other fall flavors. You know? 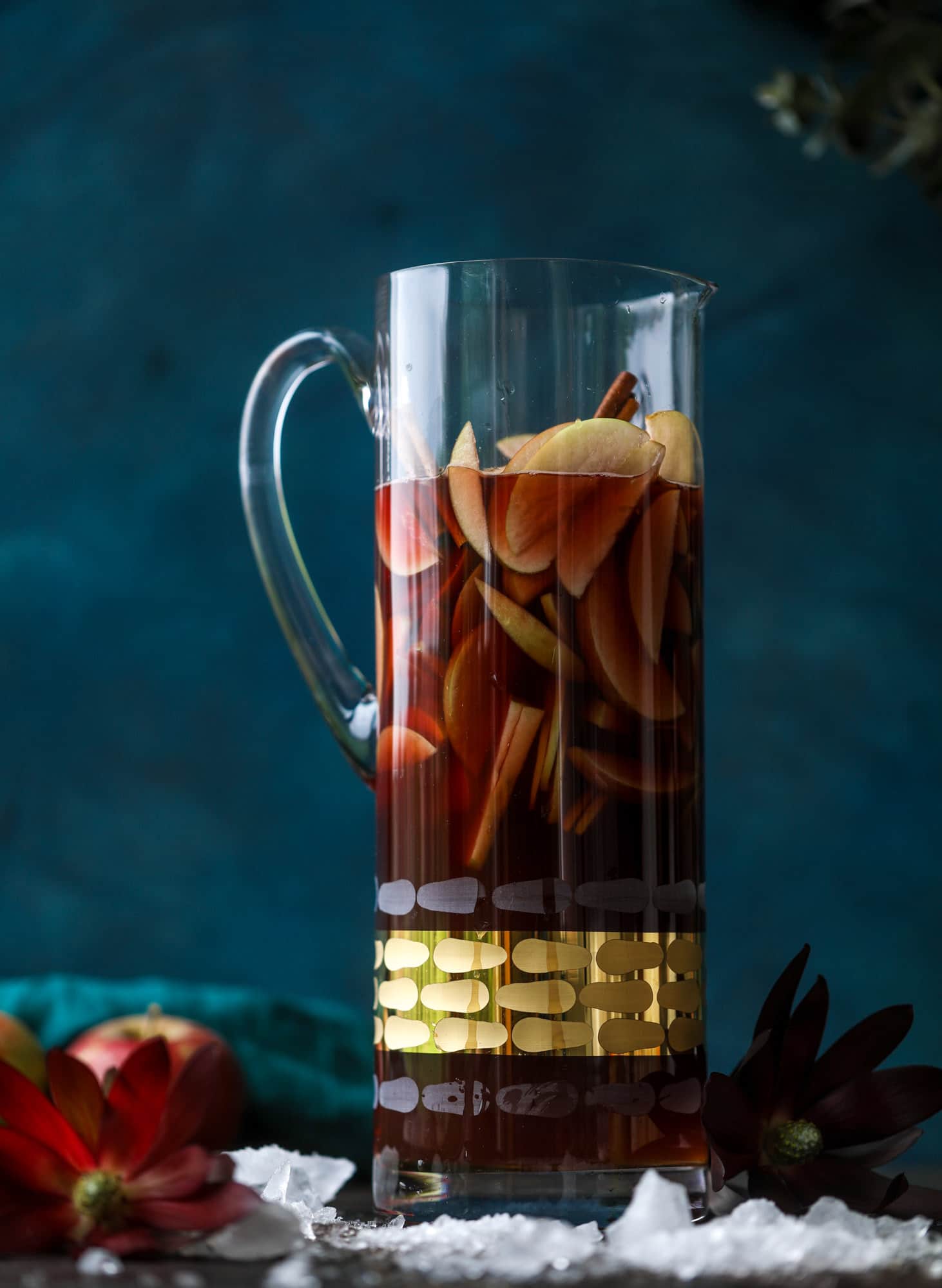 Apple cider reminds me of all things warm and cozy, chilly cool air and crunchy leaves, plaid scarves and bonfires. A grown up version of that with booze might just be the best thing ever. 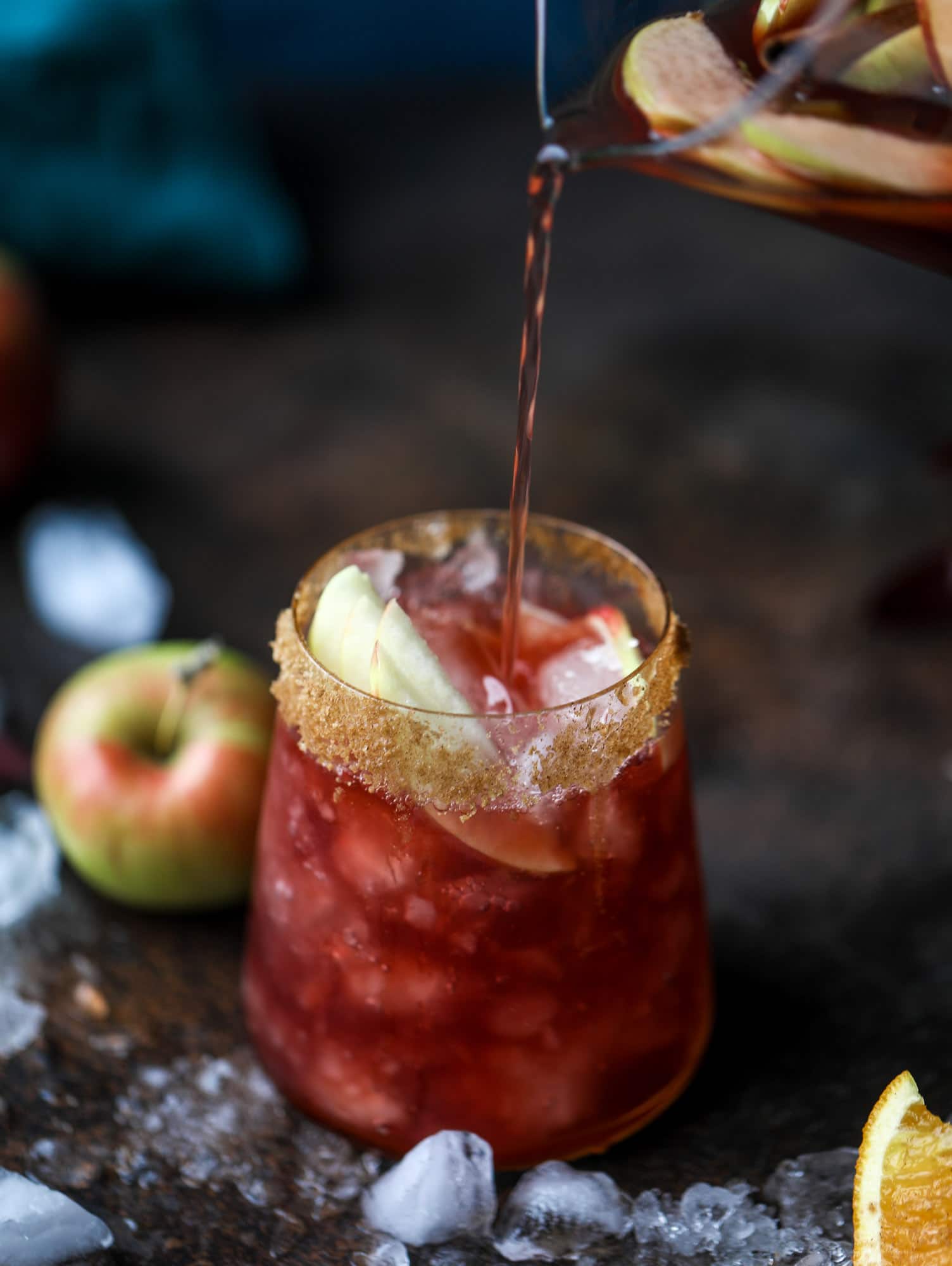 It’s not as sweet as the traditional version. It’s red wine based which is automatically more adult-like in my brain. I sweetened it with a touch of maple syrup and you can use as much as you’d like to get it as sweet as you’d like. Instead of brandy I used a bit of grand marnier for a little hint of orange, which really brings in all those flavors of fall. Cinnamon sticks too.

It is SO good. 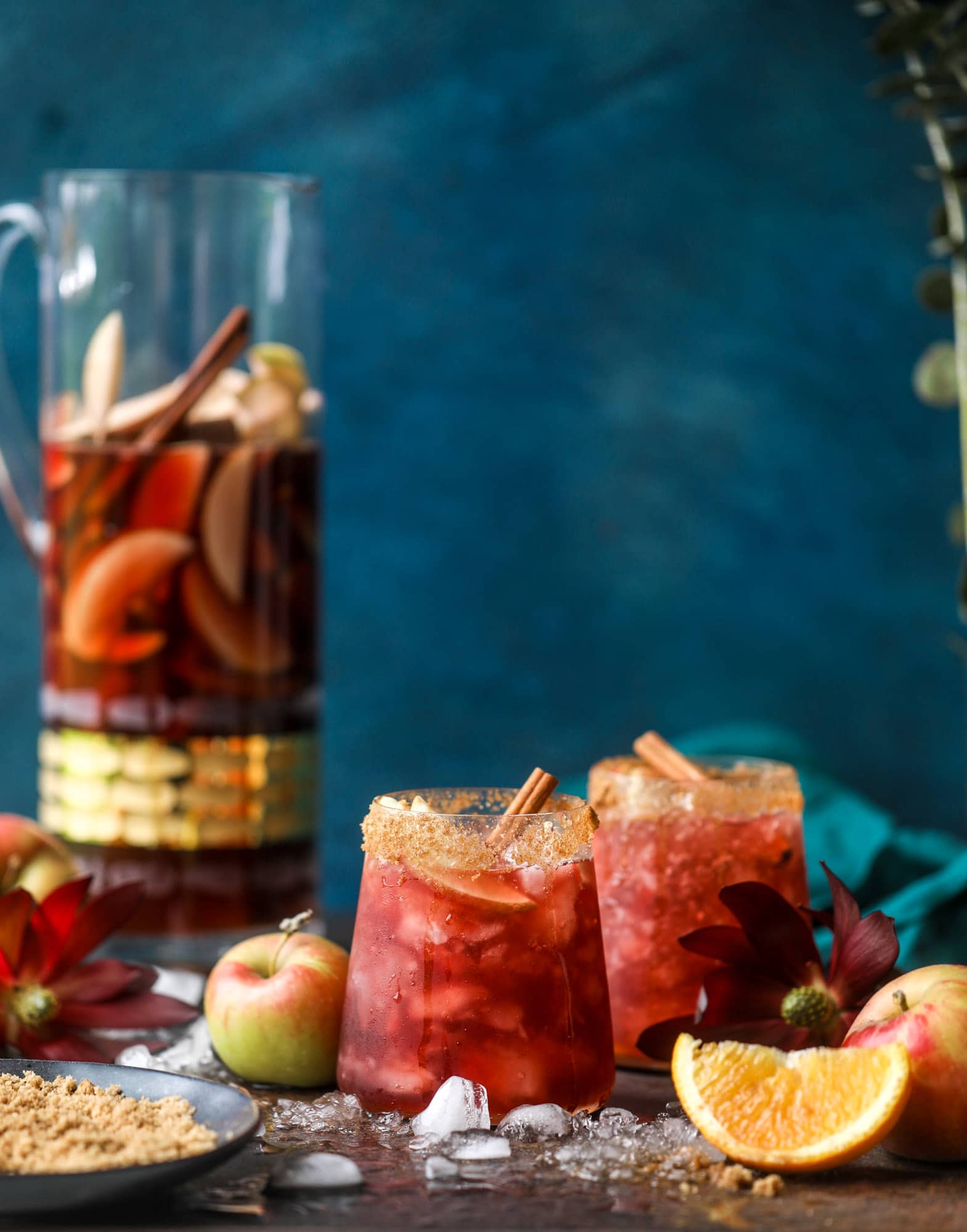 Added a cinnamon sugar rim too because I’m the most predictable!

I won’t say that I love it more than my popular regular old apple cider sangria. After all, I’m more of a white wine/rosé lover than a red wine lover.

BUT it really is just as good. If you prefer red wine and you’re very much over sweet drinks, you’ll freak over this.

It’s destined to be in the rotation until at least December. For sure. 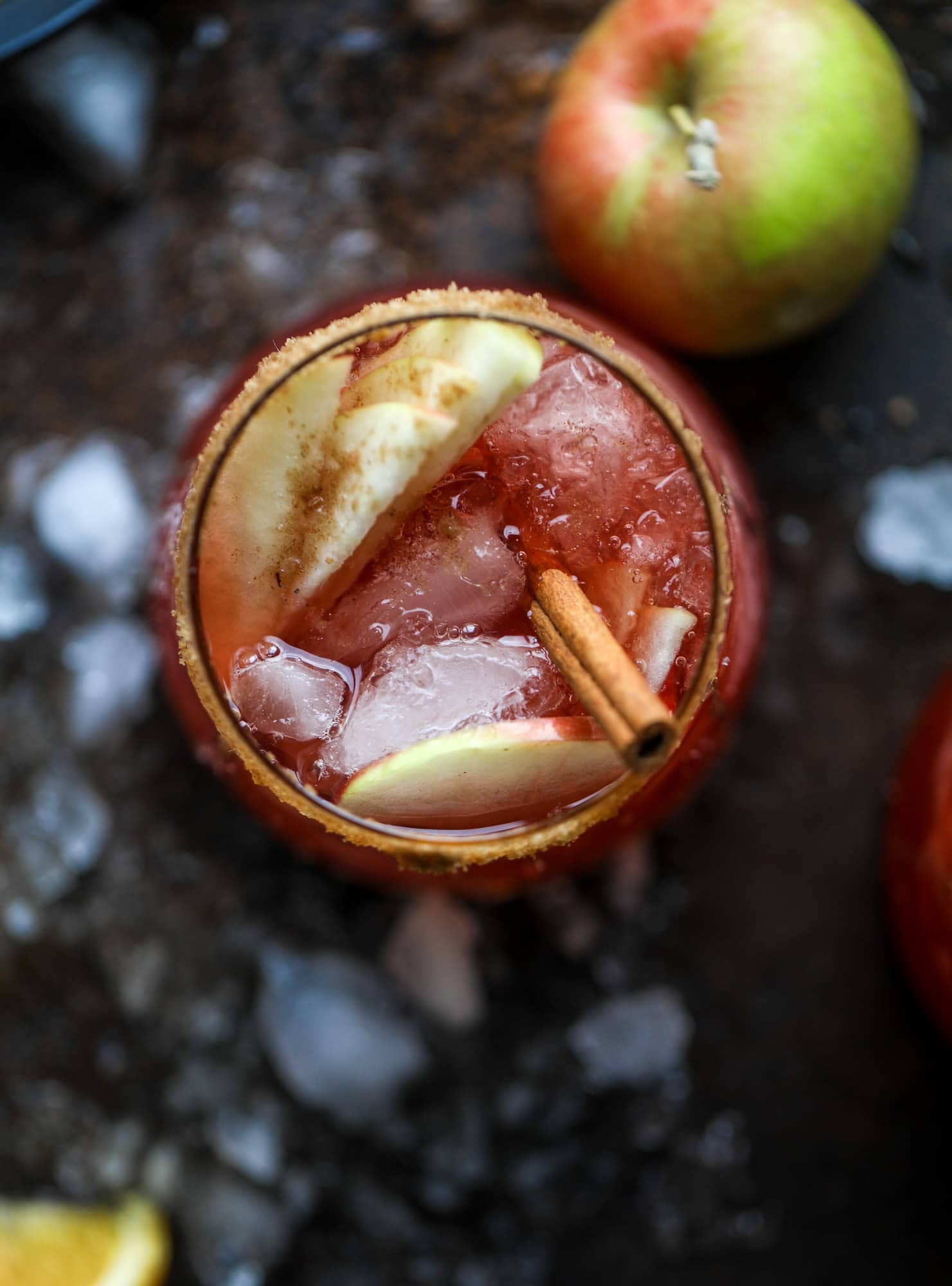 Yield: 4 people
Total Time: 30 mins
Red Apple Cider Sangria is the ultimate sangria for fall! It is sweetened with a touch of maple syrup and instead of brandy I used a bit of grand marnier for a little hint of orange.
Print Recipe Pin Recipe
5 from 38 votes
Leave a Review » 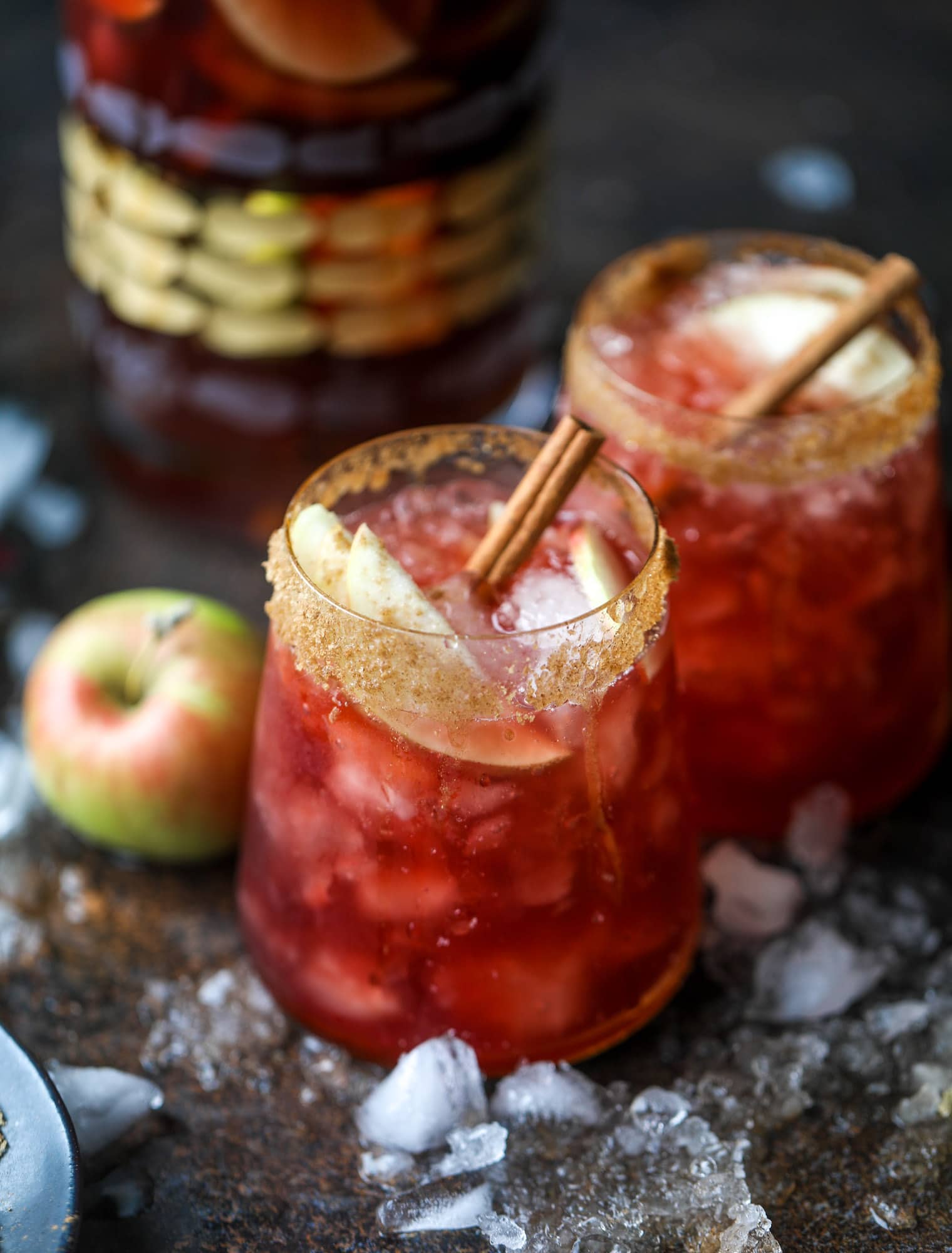 It’s also basically a glass of antioxidants and fruit, so…

« Previous PostSeptember Favorites: Lifestyle.
Next Post » My Favorite Way to Set Up a Chili Bar.