The Sweet and Savory Brussels Sprouts Slaw That I Can’t Stop Making.

I cannot stop making (and eating!) this brussels sprouts slaw! 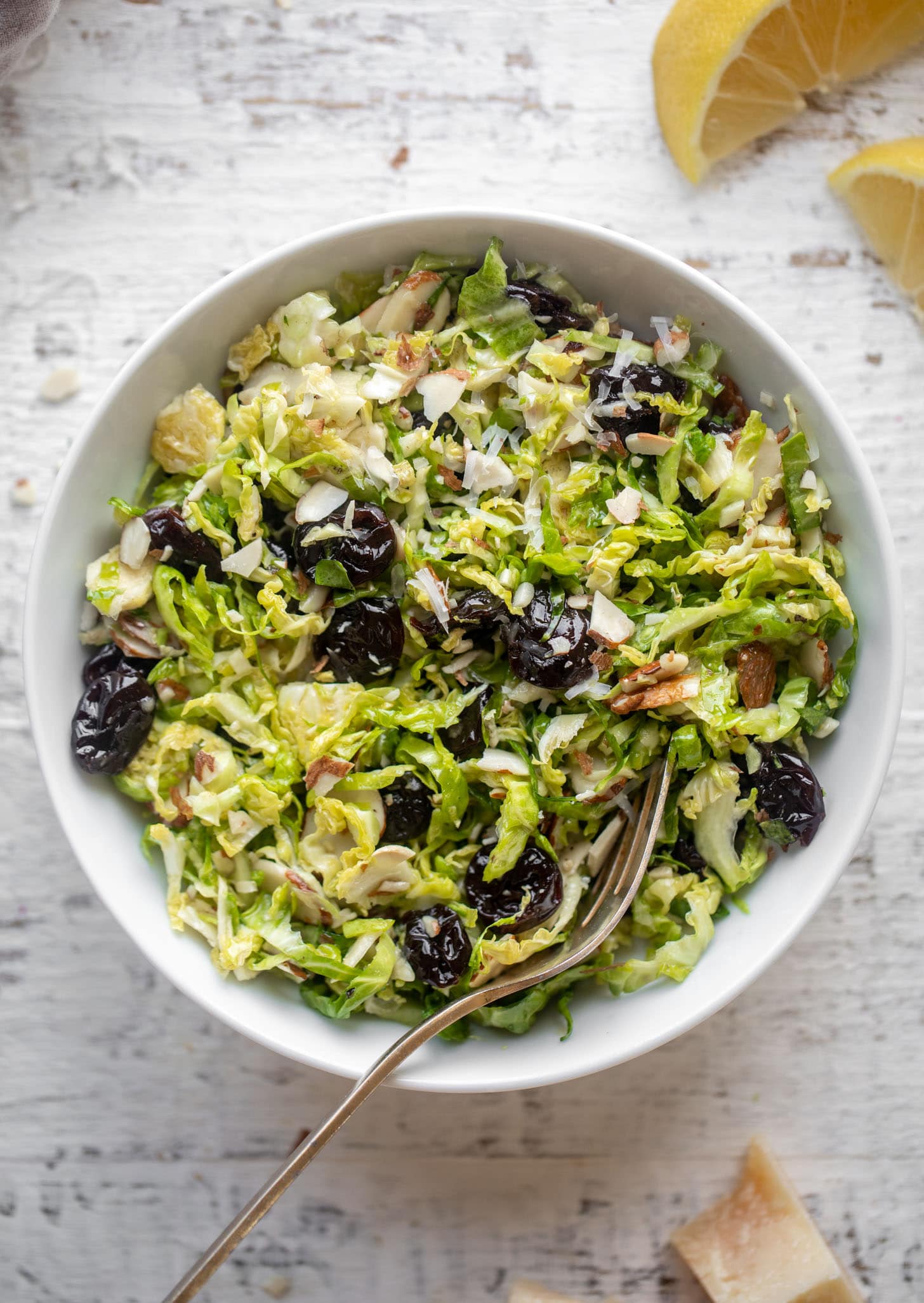 It’s sweet. And savory. It’s chewy. And crunchy. It has all the flavor and texture that I love. It doesn’t look that exciting for a Monday, but I promise that it’s going to be a staple in your fridge. Have you ever tried the brussels slaw from whole foods? This is kind of like that, but better. I mean, their version has celery so I WOULD NEVER but this is crunchy and savory and everything you need it to be.

So are we still eating brussels sprouts? I know it’s practically spring and all, but I’m still eating them and loving them. And judging from this slaw-salad hybrid, I’m going to be eating them as long as I can. Yes, by now I think we all know that I love brussels sprouts. This recipe uses them RAW! It does.

Just like many kale salads, we’re going to “marinate” our brussels for a few minutes in a dressing that removes the bitterness. Promise it changes everything. You can make this ahead of time or save the leftovers and it gets even better as it sits.

Now if those chewy bitter greens aren’t really your thing, you will probably prefer this after it has sat for a bit. If you love kale salads, then you’ll probably love it immediately.

For instance, Eddie didn’t LOVE it at first, right after it was made. He found it a bit too pungent and brussels-y, however he also doesn’t love dried cherries and almonds like I do. Ha!

After it had sat for a bit in the fridge, he really loved it. It goes with everything. I would suggest not going absolutely crazy with the dressing at first. The brussels slaw wilts as it sits and basically gets “wetter” as it sits. It’s so, so good that way, but you don’t want it swimming in a trough of dressing. So I suggest saving a bit of dressing in a separate container and adding it if needed. You do want the slaw to be “wet” when you make it, but just know that it will get more wet in the fridge as it sits. I love it both ways! The biggest reason that I love this so much? It is so incredibly versatile. You can serve this slaw as a salad. You can serve it as a side, or even as a topping on something like grilled chicken or pork. And of course, you can serve it on sandwiches! Pulled pork or chicken, even grilled cheese.

Seriously, it is perfect every single way. You can swap out the cherries for cranberries, or even apricots or dried figs. Don’t have almonds? Use chopped walnuts or pecans or even pistachios. You could even probably grate some cheddar instead of parm!

While this original version is my all-time favorite – I adore cherries, the parm is nutty and savory and sliced almonds are ideal – you can definitely make subs if needed without seriously comprising the recipe. Look at all that crunch! 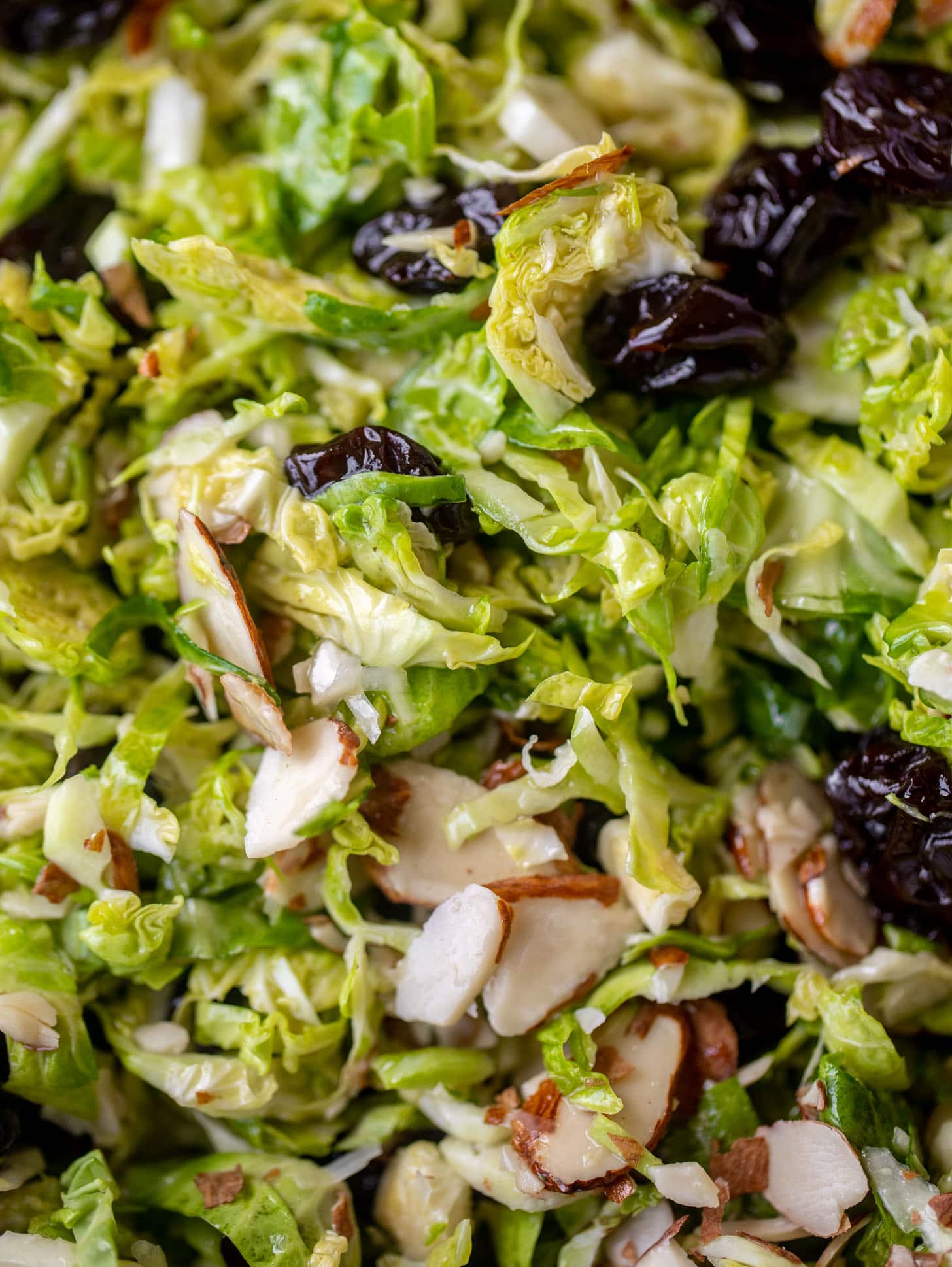 Have I convinced you yet!?! Want to live inside that crispy, crunchy bowl!

16 Comments on “The Sweet and Savory Brussels Sprouts Slaw That I Can’t Stop Making.”