Since I have so much time to complicate things, I stuck a beer in our margarita! Beergaritas aren’t a new thing around here. And I’ve already made regular blood orange margaritas. I’ve made key lime beergaritas (almost exactly one year ago to the DAY!) and also ginger beergaritas – but the latter is with ginger beer and not ACTUAL beer. As long as you get a beer you really like, these are SO good.

I’ve tried the version with the frozen limeade and sours mix and I’m sooooo not a sours person. So I had to make my own version. We made two different margaritas – one with Corona and one with this blood orange ale! I was SO super excited about the blood orange ale but didn’t end up loving the beer itself. It was good, don’t get me wrong, but I was probably expecting it to taste like blood orange soda because I am a predictable millennial. And I really, really love grapefruit beer.

Now in the margarita? It was really good! I still think I prefer the Corona though – because that’s the beer I prefer in general. It’s perfect with the blood orange and lime. It just goes together.

Also, I was freaking out because I was convinced the bottle would overflow the cocktail, but I promise it does not! Something about the air flow and all that jazz.

The best bottles to use for these are the tiny Corona ones – I think they are six ounces or something? When I asked about them in the store, the person told me “I stopped carrying those years ago! No one wants those!”

Welp. I do. Because I’m always waaaaay way behind the times. In everything. Food. Fashion. Reading. Language. So I bought the large ones. It’s not that huge of a deal, except it kind of is because then you need to hold both the glass AND the bottle! Unless you want to use a tall glass and only fill it about halfway. Still awkward to drink though.

Because of this, and because of super bowl activities, I included a recipe below for a pitcher of these babies! Where you make it all in one pitcher for your friends (errr…. Or yourself?) and just combine the ingredients in there with no fancy beer bottle stuck inside. And it’s not like I even have to explain my obsession with blood orange.

I know things have been very blood orange heavy here the last two weeks, but that’s the problem! Blood oranges are only here for a matter of WEEKS! It kills me. And this year, they aren’t even that great around here. The ones in my grocery store are already on their last leg. Anyhoo. The spiciness comes from a salted cayenne rim and you can also drop a pinch of cayenne into the shaker to give it a bit of heat. The cayenne, orange and beer combo reminds me of a michelada and it’s SO delicious. Especially with a ton of chips, guac and all the tacos you can get. 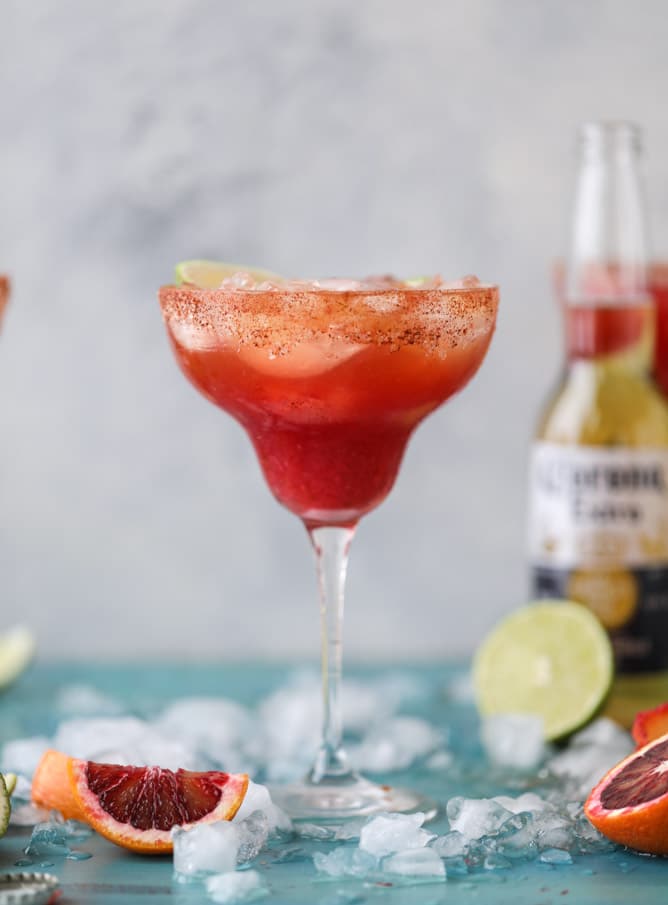 Let’s talk super bowl eats! I have an entire post dedicated to FOOTBALL FOOD (hello, 125 recipes!) so you can find all the most delicious stuff in there. But my go-to would be a ginormous snack board. Then a few dips. A big salad. Maybe some pulled pork in the slow cooker.